Project Title: An Intellectual History of the Imagination: Bridging Literature, Philosophy and Science in Early Modern and Enlightenment England

Abstract: This project aims to identify and explore a cluster of key issues relevant to the intellectual history of the imagination as a privileged locus of the interdisciplinary articulation of literature, philosophy and science in early modern and Enlightenment European thought, with a focus on the English space. The cluster of issues it proposes has to do with the tight nexus of the descriptive-explanatory and the moral-normative dimensions of the accounts of the workings of the mind in this time-frame that are relevant to a) human corporeal and mental well-being (the constitution and care of embodied minds), b) the cognitive mechanism of inquiry and creation (the pursuit and regulation of both poetic and scientific invention), and c) the nature of consensual relations (the question of sympathy in both the material-natural and the human worlds). In all these cases the neutral analysis of the mechanism of the imagination, drawing on philosophical-psychological, medical-physiological and rhetorical accounts, is always joined to a valorised consideration of the slippages, distortions and follies of the imagination, which call for its taming, governing and disciplining. The work of the imagination and the work on the imagination are intertwined facets of its history.

Dr Sorana Corneanu is Associate Professor of English and researcher in early modern studies at the University of Bucharest. She was the recipient of two doctoral research scholarships at Oxford (2005-6) and New Europe College, Bucharest (2006-7), and was post-doctoral research fellow of the Huntington Library, San Marino, CA (Oct. 2011) and of CHED, University of Queensland, Brisbane, Australia (July-Oct. 2012). Her teaching and research are concerned with the intellectual history of early modern literature, philosophy and science. She is the author of Regimens of the Mind: Boyle, Locke, and the Early Modern Cultura Animi Tradition (Chicago, 2011) and Knowledge, Selves, Virtues: Cross-Disciplinary Studies in Early Modern Literature, Philosophy and Science (Bucharest, 2014), and co-editor of Francis Bacon and the Reconfiguration of Early Modern Natural History, special issue of Early Science and Medicine 17 (Leiden, 2012), Francis Bacon and the Medicine of the Mind: Late Renaissance Contexts, special issue of Perspectives on Science 20 (Cambridge, MA, 2012), and Francis Bacon on Motion and Power (Dordrecht, 2016). She is also the book review editor of the Journal of Early Modern Studies (published by Zeta Books).

Dr Dragoş Ivana is Lecturer in English at the University of Bucharest. His main research interests are British literature, comparative literature, critical theory, intellectual history, city studies and specialised translations. He is treasurer of the Romanian Society for Eighteenth-Century Studies. Ivana’s book entitled Embattled Reason, Principled Sentiment and Political Radicalism: Quixotism in English Novels, 1742-1801 was published by Rodopi/Brill: Amsterdam & US in 2015. He is the recipient of a number of doctoral research scholarships at the University of Kent, the Bodleian Library, Oxford and the British Library and visiting fellow at Chawton House Library (2014). In 2006, he obtained a trainer certificate issued by the European Commission’s Directorate General for Conference Interpreting. In April 2010, he was awarded the “Bologna Professor” Distinction by the Romanian National Association of Student Organizations.

Irina Georgescu is a Masters student in British Cultural Studies at the University of Bucharest, with a BA diploma in World and Comparative Literature from the Faculty of Letters of the same university. She has also studied classical music and her research interests have never been too far from music. In her BA diploma (2014) Irina studied the intellectual background of early modern music and its relation to melancholy and the imagination, and in 2015 published ‘Ariel. Spiritul-muzică bine-temperat’ in the Verso magazine. 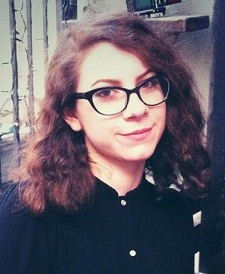 exandra Ileana Bacalu is a PhD student at the Faculty of Foreign Languages and Literatures, University of Bucharest. She holds a B.A. in English (major) and French (minor) and an M.A. in British Cultural Studies. Her B.A. thesis (The Therapeutic Uses of the Imagination in S. T. Coleridge’s Poetry) proposes a revision of the Romantic reason-emotion dichotomy, while her M.A. dissertation (Impressions, Sensations, Passions: The Realignment and Proliferation of Affective Categories from the Late Seventeenth to the Mid Eighteenth Century) looks at the congruity between the categories of sensation and passion in the early eighteenth century. Her research interests include early modern intellectual and cultural history, with focus on the history of literature, psychology and medicine and she is currently working on the therapeutic dimension of literature in the late seventeenth and early eighteenth centuries.

Eduard Ghita is doing PhD research at the University of Bucharest. He holds a BA in philology and an MA in British Cultural Studies. He majored in English and graduated with a thesis on Coleridge’s theory and practice of symbolism. His interests lie at the intersection of philosophy, literature and aesthetics in early eighteenth-century Britain. His most recent work has reexamined the concept of aesthetic disinterestedness in eighteenth-century British aesthetics, with a particular focus on Addison’s writings.

December 17, 2015 | Sorana Corneanu, The Rise of Genius and the Re-Invention of the Imagination

February 15, 2016 | Edi Ghita, “By those secret comforts and refreshments which he conveys into our souls”: The Theological Underpinnings of Joseph Addison’s Aesthetics

May 14, 2016 | Alexandra Bacalu, Remedies Using the Imagination and the Passions in Early Modern Thought

June 29, 2016 | Dragos Ivana, The Bad Effects of Sentimental Quixotism: Unprincipled Sentiment as Virtue in Henry Mackenzie’s The Man of Feeling

January-September 2017 | Monthly seminars devoted to work on an Anthology of the Early Modern Imagination.

The Janus Face of the Early Modern Imagination, Bucharest, 9-10 September 2016. 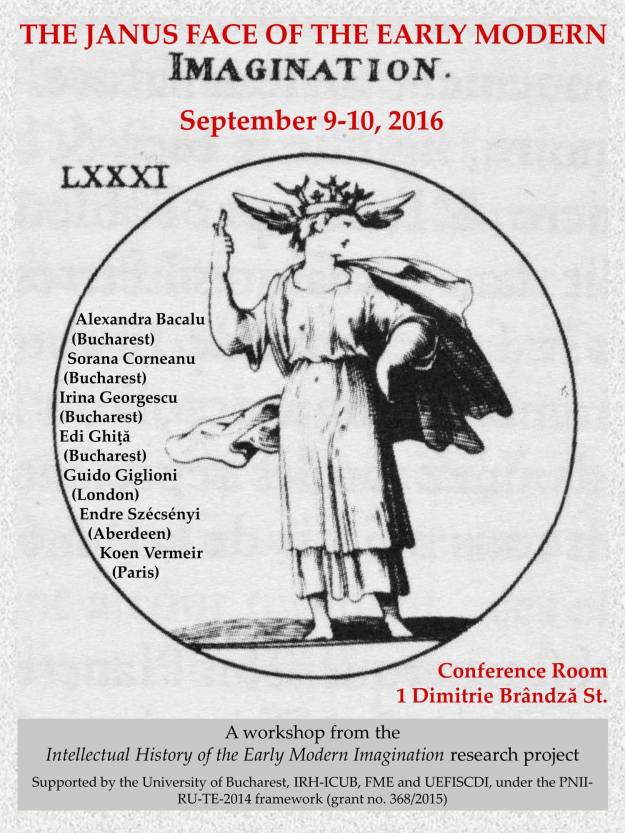 Sorana Corneanu, “The Rise of Genius and the Re-Invention of the Imagination”, International Conference “Philosophy and Science: Unity and Plurality in the Early Modern Age”, Szeged, Hungary, 20-21 November 2015.

Sorana Corneanu, “Genius and Experiment: Echoes of the Sylva in the Later Eighteenth Century”, Baconian Themes in Natural and Moral Philosophy Workshop, Institute for Research in the Humanities, Bucharest, 1 April 2016.

Sorana Corneanu, “‘Our Phanices deceptions’: Questions from Glanvill”, The Janus Face of the Early Modern Imagination Workshop, Institute for Research in the Humanities, Bucharest, 9-10 September 2016.

Sorana Corneanu, “Science and the Art of Thinking”, Bucharest Colloquium in Early Modern Science, Institute for Research in the Humanities, Bucharest, 24-26 October 2016.

Dragos Ivana, convener, with Dr Jorge Bastos, of The Politics of Sensibility: Public and Private Emotions in Eighteenth-Century England Seminar, European Society for the Study of English, National University of Ireland, Galway, 22-26 August 2016.

Alexandra Bacalu, “The City and its Therapeutic Dimension in Robert Burton’s The Anatomy of Melancholy (1621)”, Cultural Representations of the City Conference (Annual Conference of the English Department), University of Bucharest, 2-4 June 2016.

Alexandra Bacalu, “The Metaphor of the String Instrument and the Privilege of Sensation from Shaftesbury to Shelley”, Sensation, Perception, Reflection in Discourse Representation Conference, University of Piteşti, 24-26 June 2016.

Alexandra Bacalu, “Pleasure, Passion and the Good Life in the Early Eighteenth Century”, The Politics of Sensibility: Private and Public Emotions in 18th Century England Seminar, organized by The European Society for the Study of English, National University of Ireland, Galway, 22-26 August 2016.

Alexandra Bacalu, “The Conduct of the Imagination and the Cultivation of Taste in Akenside’s The Pleasures of the Imagination”, The Janus Face of the Early Modern Imagination Workshop, Institute for Research in the Humanities, University of Bucharest, 9-10 September 2016.

Eduard Ghita, “It was a pleasing reflection to see the world so prettily chequered”: Aesthetics of Urban Experience in The Spectator”, Cultural Representations of the City Conference (Annual Conference of the English Department), University of Bucharest, 2-4 June 2016.

Eduard Ghita, “Some Thoughts on the Imagination in the Eighteenth Century British Aesthetics: The Case of Shaftesbury”, The Janus Face of the Early Modern Imagination Workshop, Institute for Research in the Humanities, University of Bucharest, 9-10 September 2016.

Irina Georgescu, “Ariel’s Airs: Musical Intentions and Magical Impressions in Shakespeare’s The Tempest”, The Janus Face of the Early Modern Imagination Workshop, Institute for Research in the Humanities, University of Bucharest, 9-10 September 2016.

Sorana Corneanu, “Logic Re-Disciplined: Joseph Glanvill on the Imagination and the Acts of the Intellect”, Powers of Imagination Seminar Series, ESSEH/CNRS, Paris, 27 January 2017.

Alexandra Bacalu, “The Re-Emergence of Stoic Prescriptions for the Imagination in the Scottish Enlightenment”, Birth, Death, and Rebirth: (Re)Generation as Text Conference (Annual Conference of the English Department, University of Bucharest), Bucharest, 8-10 June 2017.

Alexandra Bacalu, “The Concern for the Care of the Poet’s Thoughts in Shaftesbury and Akenside”, New Perspectives in Linguistic and Literary Research, Colloquium of the “Alexandru Piru” Doctoral School, Faculty of Letters, University of Craiova, March 2017.

Alexandra Bacalu, “The Associative Imagination and Divine Passions in Mark Akenside’s The Pleasures of Imagination (1744),” University of Bucharest Review, special issue on Religion and Spirituality in Literature and the Arts, vol. V, no 2 (2015), 101-8.

Dragos Ivana, “Quixotic Readers of Human Nature; Or, the Misprisions of Sympathy in Henry Mackenzie’s The Man of Feeling”, in Journal of the “C. Peter Magrath” Research Center for Cross-Cultural Studies, special issue on East-West Cultural Passage, eds. Alexandra Mitrea and Ana Karina Schneider, vol. 16, no. 1 (2016), 100-109.

Sorana Corneanu, “Francis Bacon on the Imagination, Rhetoric and the Art of Direction”, in Koen Vermeir (ed.), Knowledge and Imagination in Early Modern and Enlightenment Philosophy, Dordrecht: Springer, 2017, forthcoming.

Alexandra Bacalu, “The City and its Therapeutic Dimension in Robert Burton’s The Anatomy of Melancholy (1621)”, University of Bucharest Review, special issue on Cultural Representations of the City, vol. VI, no. 2 (2017), forthcoming.

Eduard Ghita, “‘It was a pleasing reflection to see the world so prettily chequered’: Aesthetics of Urban Experience in the Spectator”, University of Bucharest Review, special issue on Cultural Representations of the City, vol. VI, no. 2 (2017), forthcoming.